Stephen Gaskin passed from this plane of existence two weeks ago. Several people on the Free Family Union list serve posted their remembrances. Here’s mine:

I attended a couple Monday Night Class sessions at the old Playland/Family Dog hall in 1969. Stephen Gaskin was the spiritual guide for this group of 100s that congealed around his psychedelic philosophic meanderings. I was usually stoned and chanting OM was a favorite part of the evening’s activities. <g>

Then in 1970 when I was living with the original group that bought the Ortiviz Farm in the Huerfano Valley, we decided everyone had to go find straight jobs to earn enough to pay off the balloon payment that was coming due. I left in the middle of winter and ended up joining The Caravan in its clockwise circle tour of the USA, ending up back in San Francisco early 1971 at Sutro Park overlooking the breakers of Ocean Beach where Stephen announced that “they” (whoever they were) had decided to leave the City again to find a permanent place to settle down. (Which would end up being The Farm in Summertown, Tennessee.)

My attraction was to the new custom that Stephen had introduced of “four marriage” — the close relationship that he had with Michael, along with Ina May and Margaret offered a semblance of openness to a young queer man like myself at the time. But after 1000s of miles on the road in that caravan of 50+ converted school buses, it became clear that homosexuality had no place in the Caravan’s “four marriages” which seemed all too much like a hip version of wife swapping. So when Stephen announced their return to the road, I decided it was time to find that job which had propelled me out of the bliss of adobe living in the first place.

Before the Caravan left again that spring of 1971, Stephen took everyone to the Zen Center for the ritual chanting of the Diamond Sutra and I will always owe him a debt of gratitude for his introducing Susuki Roshi whose twinkling eyes with secret messages of cosmic harmony still come to me in moments of silent introspection. 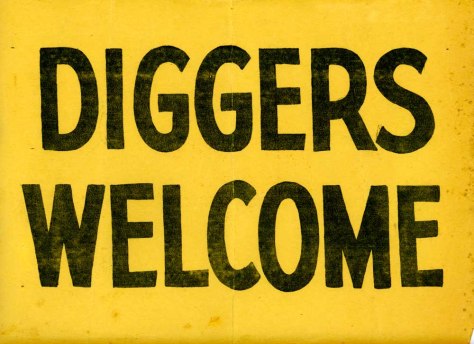 Recent addition to the Digger Archives. Haven’t figured out where to place this in the site yet. ComCo (most likely) printed this. The reverse side had the following instructions:

This was March, 1967. Optimism abounding.