Came across this article from the East Village Other in 1967. It highlights Jim Fouratt and his escapades as a digger in New York after he left San Francisco in 1967. (See below for transcription of the article which appeared in the 8/19/67 issue of the paper.) 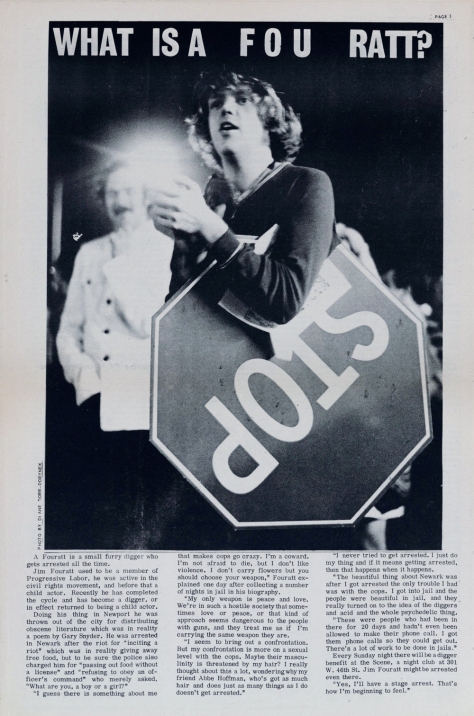 Transcription of the text:

A Fouratt is a small furry digger who gets arrested all the time.

Jim Fouratt used to be a member of Progressive Labor, he was active in the civil rights movement, and before that a child actor. Recently he has completed the cycle and has become a digger, or in effect returned to being a child actor.

Doing his thing in Newport he was thrown out of the city for distributing obscene literature which was in reality a poem by Gary Snyder. He was arrested in Newark after the riot for “inciting a riot” which was in reality giving away free food, but to be sure the police also charged him for “passing out food without a license” and “refusing to obey an officer’s command” who merely asked, “What are you, a boy or a girl?”

“I guess there is something about me that makes cops go crazy. I’m a coward. I’m not afraid to die, but I don’t like violence. I don’t carry flowers but you should choose your weapon,” Fouratt explained one day after collecting a number of nights in jail in his biography.

“My only weapon is peace and love. We’re in such a hostile society that sometimes love or peace, or that kind of approach seems dangerous to the people with guns, and they treat me as if I’m carrying the same weapon they are.

“I seem to bring out a confrontation. But my confrontation is more on a sexual level with the cops. Maybe their masculinity is threatened by my hair? I really thought about this a lot, wondering why my friend Abbe Hoffman, who’s got as much hair and does just as many things as I do doesn’t get arrested.”

“I never tried to get arrested. I just do my thing and if it means getting arrested, then that happens when it happens.

“The beautiful thing about Newark was after I got arrested the only trouble I had was with the cops. I got into jail and the people were beautiful in jail, and they really turned on to the idea of the diggers and acid and the whole psychedelic thing.

“These were people who had been in there for 20 days and hadn’t even been allowed to make their phone call. I got them phone calls so they could get out. There’s a lot of work to be done in jails.”

Every Sunday night there will be a digger benefit at the Scene, a night club at 301 W. 46th St. Jim Fouratt might be arrested even there.

“Yes, I’ll have a stage arrest. That’s how I’m beginning to feel.”

The new page in the Digger Archives that tells the story of the Black People’s Free Store (Fillmore district, 1967-68) just went up. Included is the video clip below.

What is a Digger?

For the back story, check out the new page. But long story short, I’m trying to figure out who this is. I thought it might be brother to Roy Ballard. If anyone knows for sure, please let me know.