The Homebrew Computer Club was an important nexus in the underground computer culture that developed in the San Francisco Bay Area in the early 1970s. Out of this informal grouping of computer hobbyists, freaky engineers and long-hair technologists came several of the early computer companies that would quickly develop and spread the Personal Computer revolution and ultimately the Internet/World Wide Web domain two decades later. In the traditional telling of this history, the influence of the San Francisco Diggers has been completely overlooked and overshadowed by the rise of the commercial products of the computer revolution—Apple, Microsoft, IBM PC, etc. But the Diggers played a key role in the early culture of the computer underground that continues to this day in the form of open-source software and the idea that the Internet should remain Free. Here’s the proof (i.e., evidence) of this thesis.

Fred Moore was one of the founders of the Homebrew Computer Club. The history of this group is well documented.* But one aspect of Fred Moore’s philosophy has never been mentioned. Fred was inspired by the Diggers. I will delve into this in more detail but for now, after long desire to get this document posted for all to share, here’s one of Fred’s digger-inspired manifestos. He wrote this in 1974.

Put Your Trust in People, Not Money

Money is obsolete, value-less, anti-life, etc. The use of money displaces trust, causes alienation, fragments community, tends to reduce everything and every being to a commodity, etc. Money is the economic language of our present society. Buying, selling, renting, and charging interest are the rituals that maintain and reinforce the myth of the market economy. The myth is that everything has a monetary price. And the only value is price.

Money is a symbolic tool. Yes, and in using that tool over and over we have subjected ourselves, our social relationships, and the ecology of our environment to that tool—so that now we are finding that we are not the master of the tool, but the tool has become the measure of us and our world. Money is God. *Here’s an excerpt from Walter Isaacson’s biography of Steve Jobs. This is an account of how Steve Wozniak met Steve Jobs and Woz’s early inspiration to give away his Apple computer for free, and how Steve Jobs convinced him otherwise.

Woz was usually too shy to talk in the meetings, but people would gather around his machine afterward, and he would proudly show off his progress. Moore had tried to instill in the Homebrew an ethos of swapping and sharing rather than commerce. “The theme of the club,” Woz said, “was ‘Give to help others.’” It was an expression of the hacker ethic that information should be free and all authority mistrusted. “I designed the Apple I because I wanted to give it away for free to other people,” said Wozniak.

This was not an outlook that Bill Gates embraced. After he and Paul Allen had completed their BASIC interpreter for the Altair, Gates was appalled that members of the Homebrew were making copies of it and sharing it without paying him. So he wrote what would become a famous letter to the club: “As the majority of hobbyists must be aware, most of you steal your software. Is this fair? . . . One thing you do is prevent good software from being written. Who can afford to do professional work for nothing? . . . I would appreciate letters from anyone who wants to pay up.”

Steve Jobs, similarly, did not embrace the notion that Wozniak’s creations, be it a Blue Box or a computer, wanted to be free. So he convinced Wozniak to stop giving away copies of his schematics. Most people didn’t have time to build it themselves anyway, Jobs argued. “Why don’t we build and sell printed circuit boards to them?” It was an example of their symbiosis. “Every time I’d design something great, Steve would find a way to make money for us,” said Wozniak. Wozniak admitted that he would have never thought of doing that on his own. “It never crossed my mind to sell computers. It was Steve who said, ‘Let’s hold them in the air and sell a few.’”

Here’s a scan of Lew Welch’s piece “A Moving Target Is Hard To Hit” which the Communication Company printed and distributed on Haight Street in the pre-Summer of Love (March, 1967). I was talking with my friend Mel Ash today and it turns out we two were similarly affected by Lew Welch’s outpouring of poetic genius. I thought I had posted this scan on the Digger web but it turns out I only have the xerox that I made in 1974. I will have to update the catalog to remedy that oversight. But in the meantime, here’s for you, Mel (and Lew). 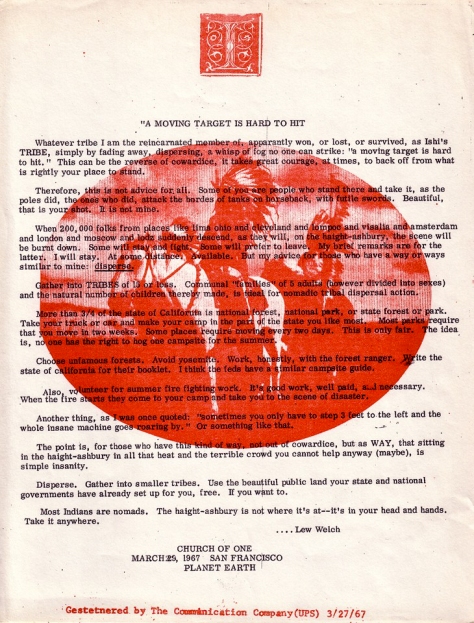