The hypocrisy of political correctness. The City removed the tableau on the other side of this monument* in San Francisco’s civic center that depicted a Native California Indian in a subservient pose with two Spanish figures (missionary, vaquero). And yet this statue remains depicting the miners who flocked to California after news of the discovery of gold in 1848 at Sutter’s mill first spread to Yerba Buena (the Spanish pueblo that would become San Francisco) then nationwide. The Forty-Niners (depicted below) on the whole were a catastrophe for California Indians, much more so than the Spanish and subsequently Mexicans had been. The Forty-Niners carried out what can only be called genocide on the Native peoples. 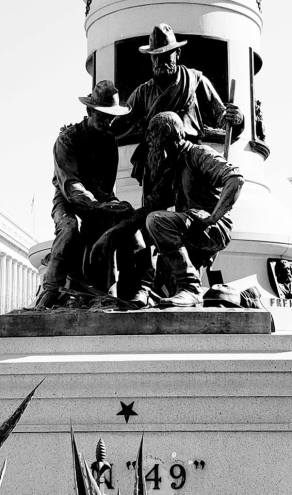 WHY NOT TELL THE HISTORY INSTEAD OF HIDING IT AWAY?

*known as Pioneer Monument, located on Fulton between Larkin and Hyde.

2 thoughts on “The hypocrisy of political correctness”